Despite summer coming to a close, the season for escaping the city and exploring the great outdoors is still in play. Children are playing in the grass, and the parents are outside and keeping a watchful eye. Summer is a time to be enjoyed; however, to throw caution in the wind, let us talk a little bit about Lyme Disease.

Lyme Disease is the most common tick-borne illness that affects multiple organ systems in stages. It’s most prevalent in the North East United States Region, with some cases able to reach Canada.

According to the CDC, each year, approximately 30,000 Lyme disease cases are reported by state health departments and the District of Columbia. The CDC conducts two project studies to best estimate the growing number of cases. It uses surveillance data to determine how many cases occur each year. The figure below shows Lyme disease cases in 2018 to illustrate the affected region. 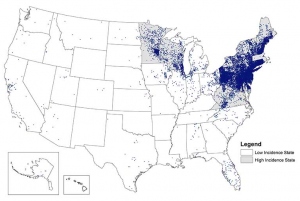 [Figure.1] Each dot represents one case of Lyme disease and the dot in a state does not necessarily mean that Lyme disease was acquired in that state. It indicates that people travel between states, and the place of residence is sometimes different from the place where the patient became infected. Courtesy of CDC.

Lyme Disease is caused by a specific bacteria living inside deer ticks and western black-legged ticks called Borrelia Burgdorferi, and more rarely, Borrelia mayonii.  The structure of the Borrelia bacteria species is spiral; therefore, it classifies as a spirochete. Ticks reside in high wooded grass and green areas that can attach to any part of the body. They’re usually found in hard-to-see regions of the body like the groin, armpits, scalp, and legs. According to the CDC, the tick must be attached for 36 to 48 hours or more before the Lyme disease bacterium can be transmitted.

Symptoms of Lyme disease occur in stages. It starts with early localization of the skin with a skin rash called erythema migrans, which is a rash that appears at the tick bite site, usually within 7 to 14 days after the bite and lasts to 3 to 30 days.  80% of Lyme cases occur with erythema migrans rash as it progresses, the rash changes in shape with central clearing resembling a bulls-eye. Other early manifestations include:

If left untreated, the infection can spread to the later stages of a symptomatic development. The second stage affects the nervous system, which can occur weeks to several months after the tick bite and maybe the first manifestation of Lyme disease. The classic triad of short term neurologic problems is meningitis, cranial neuropathy, and motor or sensory radiculoneuropathy. However, each of the findings can occur by themselves.

Other neurologic conditions include:

The third stage of Lyme disease is the Late Stage. Late Lyme disease occurs months to a few years after the onset of infection, which manifests as large joints’ arthritis. These features are less common nowadays since most patients are diagnosed and treated during the earlier phase of Lyme disease.

Lyme disease is tested and diagnosed in many ways. The first way to test is by the clinical evaluation of the erythema migrans rash. Additional tests include a blood draw where the process used to analyze the result is by a method called Enzyme-Linked Immunosorbent Assays, ELISA, and another way to confirm ELISA results with something called a Western Blot Analysis. These two tests, in its combined use, accurately determine the sensitivity and specificity of Lyme Disease.

An ELISA test is a method to measure antibody exposure of the bacteria Borrelia Burgdorferi measures the sensitivity. The Western Blot confirmed the presences measuring the specificity of the corresponding antibodies. LabFinder offers tests to check for Lyme Disease antibodies.

Since the primary cause of Lyme Disease is bacteria, the natural course of treatment is to give antibiotics. If left untreated in its early stages, other medications can be used to treat the later clinical manifestations. However, side effects are widely known. The untreated later stages of Lyme disease can cause long term health and lifestyle complications.

The best way to prevent Lyme Disease is to wear proper clothing covering as much skin as possible when going out to the woods for outdoor activities. Thoroughly checks for ticks that might have latched on. If a tick is found, do not panic. Immediately remove a tick with tweezers. See the figure below. 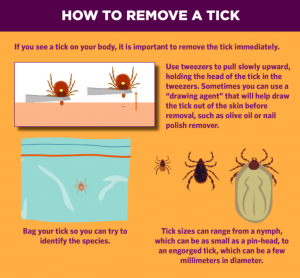 [Figure. 3] Demonstrates how to properly handle a tick.

If you or a loved one suspects Lyme Disease, please book your test with LabFinder by clicking here. LabFinder offers various medical tests with a secure patient portal that seamlessly integrates results from any lab or radiology imaging center that’s in our system.

How Is COVID Different from the Flu?

DEXA Scan: What Does It Mean for Diagnosing Osteoporosis?

Keep in Touch
© 2020 LabFinder, LLC. All Rights Reserved
The information is not intended to replace the advice of your own physician or other medical professional. You should consult a medical professional in matters relating to health, and individuals are solely responsible for their own health care decisions regarding the use of this information.
© 2020 LabFinder, LLC. All Rights Reserved
Privacy Policy Terms of Use
Book using app